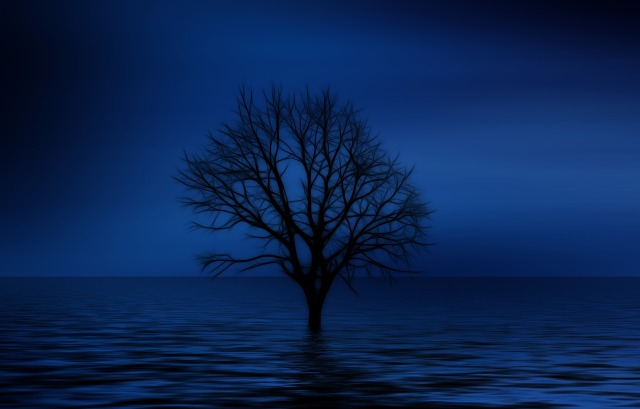 Image by Gerd Altmann of Germany on Pixabay

The inspiration for this piece came to me in a vision of Eden.  It was beyond my reach, on the ocean floor. With hands raised to One who would see me and hear me, I cried out:  “Let me see this place! Let me in!” Then came an answer: “Not yet”.

There was a day when God gave to Man dominion over the earth.

“And God blessed them, and God said unto them, Be fruitful, and multiply, and replenish the earth, and subdue it: and have dominion over the fish of the sea, and over the fowl of the air, and over every living thing that moveth upon the earth.” (Genesis 1:28 KJVA.)

Man was strong and free.  God had bestowed the power to command all of creation.  Man could run, and could climb. Man could swim, and He could fly.  All the Earth was Eden, and all was good.

But then was something different.  Man was no longer the same. Gone were his gills and his fins.  The power over water was leaving him now. For Man, water became a blessing and a curse–life or death to him and to all life.  No longer could the human command the water.

Now comes the flood.  The rain came down and the oceans swelled.  Noah and his kin took to an ark for survival.  During 150 days and more, man’s conversion became more complete.   And Noah called upon the raven and the dove to fly for him, and seek dry land.  Continents were then revealed, but not Eden.

“And the ark rested in the seventh month, on the seventeenth day of the month, upon the mountains of Ar´arat.” (Genesis 8:4 KJVA.)

Now comes Jonah–thrown into the raging sea by a team of sailors.  The whale knew he would not survive and thus became as the Ark had been for Noah–a vessel of safety.

“Now the Lord had prepared a great fish to swallow up Jonah. And Jonah was in the belly of the fish three days and three nights.” (Jonah 1:17 KJVA.)

What secrets did the whale tell Jonah?  Did it carry him back to Paradise? Was it there, in the waters of the deep?   Jonah had heard the call of God, and had seen Eden.

Now comes Jesus, walking upon the Sea of Galilee. He remembers that which had been forgotten for so many generations .  He calls to Peter but Peter becomes lost, and can not remember.

Now comes the ichthys, and symbology of the fish.  Where we find the fish, we find Eden. But still man can not go there.  The way is shut for generation after generation. See now the ichthys as the ajna, calling upon us to see, or to sea.

Now comes Atlantis, and once again Utopia disappears into the great and dark abyss.  The event reminds us to remember. Will we ever find the lost city?

Now I ask: is Eden in the sea?  When will we return to it? When will we remember our dominion over all the Earth?  I heard a voice say: “Not for generations will you remember. Not for 70 or 700 generations.  But return you will. All generations will return, and yet you have already returned. For there is no returning, and there is no becoming.  Past and future are illusions. Time does not exist. Know you are there, and Paradise is found. For Eden is a state of being, and a place each of us can go. Any who wish to find Eden must reclaim the power of dominion.  And to have dominion over self is to be all-powerful.”

Now come the whales.  They carry the ancient secrets.  They know the way. They hide, deep within the ocean.    Yet humans seek to destroy the whales. These majestic creatures carry the sounds of joy, and the tones of remembrance.  They are the guardians of the very song of God. They watch over Eden and keep it safe from humanity, and safe for humanity.

Today, the same water that covered the Earth, and covers our paradise, recedes from us.  Humans have polluted and defiled the lakes and the oceans. We have harmed, and made filthy, our life-giving water.  We have made filthy our Eden. Shortage is coming. Many will die. But hope remains, if only we believe that we are the very water of life.

“He that believeth on me, as the Scripture hath said, out of his belly shall flow rivers of living water.” (John 7:38 KJVA.)

The search for the lost paradise exists  in order to teach of duality. This story, as told to me, is about irony and synchronicity.  Past and future are explained here. The story is about sabotage and redemption. The teachings of the waters are endless.  I thirst for more, therefore I ask for the sacred water to be given me.

I have no answers still, only more questions.  I still seek Eden, I still can not fly. And still I thirst.

1 Response to Sea of Eden